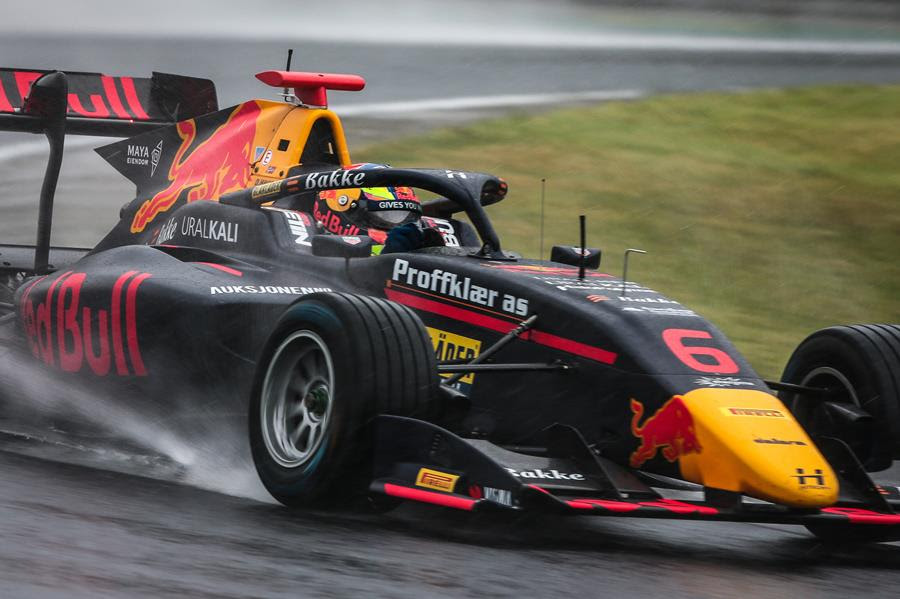 Dennis Hauger drove superbly in slippery conditions to take 3rd in the second FIA F3 race at the Hungaroring. The 17-year-old Norwegian charged through the spray from P3 on the grid to lead much of Race 2, only losing first as the rain tyres shredded on a drying track.

Liam Lawson suffered engine problems and was forced out of both races when he had the pace for very good results. Fellow Red Bull Juniors Igor Fraga and Jack Doohan again showed speed but were denied points.

Hauger fighting for the win

On the podium for the first time in his debut F3 season, Hauger drove superbly all weekend. “Obviously P3 is really good, still a bit of a shame,” admitted the Hitech driver. “I think we had the pace to win but the tyres went away. That’s a shame because I think that the pace in the beginning was really good.”

“Today I was just defending for my life towards the end of the race, trying to keep them behind. Finally it was just enough for P3 so I am happy with that for sure. I think we are progressing every race now.”

“We had really good pace in most conditions. In Free Practice in the dry I was just getting used to it and I think that the pace was actually better than it showed in the results,” explained Hauger who was 19th.

“Going into the wet Qualifying we were not bad, I struggled a bit on the second set but we were still in the top ten.”

“Race 1 was quite tricky conditions, starting with slicks when it was half wet. I had a bit of a moment before the Red Flag which lost me a few positions but I came back after the Red Flag and am so happy that it got me into position for a good place on the grid for Race 2.”

“The pace at the beginning of Race 2 was mega and I think we pulled away to like about 3 seconds and though we struggled at the end I think we can take away quite a few positives from this weekend and look forward to bring those to Silverstone,” stated Hauger.

A fabulous start in the damp Race 1 saw Lawson charge from 11th to 4th in the first couple of corners. The Hitech driver settled in with eyes on at least a podium only to have his engine expire in dramatic fashion on lap 5.

“What can you say, at the end of the day I can just be happy that I did everything that I could in both races and the technical problems are outside of my control,” stated the 18-year-old New Zealander philosophically.

“Looking at the performance overall, I’m not happy with Quali, we missed the boat there in the wet. We had good pace in the first run and then changed something for the second and it just didn’t go well at all. Basically I could not turn the tyre on so I couldn’t improve my lap time even though the track was faster, so that was disappointing.”

“Race 1, I got a really good start, tried to push for the front as much as I could and then…. lit up the track completely with fire as the engine let go in the biggest way. Then today, again, another really good start to the race and pushed through to P12, P11 or something and then… another engine failure.”

Since the start of the F3 season the 21-year-old Brazilian has looked well capable of getting in the points but has so far missed out, often through misfortune. “Especially Sunday, for this weekend I would say that finding the pace was a little bit more difficult than at the Red Bull Ring. In Qualifying for example, even putting everything from all the drivers, all the data in our team, we were still quite a way off from the pole position time.”

“In Race 1, on slicks in the damp conditions I was able to gain some positions but here in the Hungaroring it is so hard to pass that I could not make up all the places I think we should have been able to.”

“Today in the rain conditions I felt that there were more possibilities and I was really going for it but then on the exit of the corner the guy ran wide and touched me, I got front suspension damage and it was over for me.”

“That was a real shame because we had good pace, coming from 15th to 9th, I was catching up very quickly the guys ahead and then that happened, very unfortunate for me,”  explained the Charouz driver.

“We seem to have the car right in the dry now,” asserted the 17-year-old Australian. ”Practice was definitely quite OK, I didn’t manage to get the time on the first push lap on the new tyre because of a bit of traffic but on the second lap even though the tyre is not quite as good we got up to 8th and I really thought we had the pace for the top 3 in that session.”

“I was confident and it was a big step forward for the team so I was happy with that.”

“Then it rained and at first Quali was cancelled, then rescheduled. Starting 8th would not have been bad at all but then we did run Qualifying in the wet and as a team did not get it all together, misjudged the conditions and couldn’t get the tyres to work.”

“So we ended up well towards the back of the grid, so not so good compared with where we were earlier in the day.”

“Race 1 in the damp on the slick tyre, we were quite good, moved forward up to I think P14 from P22. I got a good run on Zendeli out of the chicane and went to the inside, got on the inside kerb and slightly lost the front of the car and went into the side of him.”

“In a perfect world he could have given me a bit more room but I did slightly understeer into him. I made the contact and it was my fault. I had to retire, not ideal,” explained the HWA driver who was penalised for the incident and would start Race 2 from the back of the grid.

“Started P30 for today’s race. The start was quite good, had moved up 8 positions. Then we had a Safety Car, I decided to cool the tyres a bit by going on the wet, I wanted to prevent overheating as the track dried out. After the restart they were a little bit cool for the first 2 laps and I did not have that much pace but as then the pace started to pick up and I was able to overtake quite a number of cars.”

“If I could have got a clear lap I could have been up there for fastest lap but there was lot of traffic to get through. Then with 3 laps to go, I was P14, I’d just passed Schumacher down into Turn 1 then passed Novalak at Turn 2. Then on my way up to Turn 4 I felt that the rear right was modulating.”

“That’s when I knew I had a puncture, unfortunately I have quite a bit of experience of right rear punctures from the beginning of the year. I knew what it felt like so I just went straight. I knew that if I tried to turn the car we would have been in the wall.”

“A mystery how we ended up with a puncture. Luck doesn’t seem to be going our way, three rounds in. It would be great if we could just show our potential. We are bloody quick, just every time it gets to be important like Quali then we are down in the bottom half of the grid. To an outside eye we just look to be struggling to be in the top 20, that’s how it is but it’s not the real situation. At Silverstone we should be fighting for the top spot.”